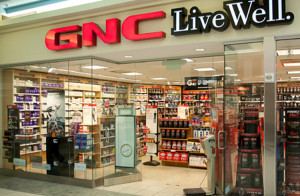 GNC, one of the world’s largest nutrition retail stores, is being sued by the Oregon attorney general.  The lawsuit accuses GNC of selling thousands of units of 22 workout and fat-burner supplement products that contain an ingredient called picamilon, also used as a prescription drug in Russia to treat anxiety.  In addition, GNC is being accused of selling other workout and weight-loss supplements that contained a synthetic chemical known as BMPEA, Beta-methylphenethylamine.   GNC is being accused of  more than 4,000 individual violations of Oregon’s Unlawful Trade Practices Act, including failing to disclose that their products contained the chemicals and misrepresenting that the products were lawful dietary supplements. Each violation carries a maximum penalty of $25,000.00  That’s potentially a hundred million dollars in damages that GNC could be hit with!!  After the law suit was filed, the  news caused  GNC stock to plummet 30%, from $42 down to $29.  On Nov 2nd,  shareholders  filed a class action law suit against the franchise.

Ok, what do I think about this?  For those of you that follow my articles, TV and radio health segments, you know that I am a big advocate of all natural whole food products.  I believe that we were designed to consume fruits, legumes, vegetables and herbs for our nutritional and medicinal needs.  This lines up with Hippocrates, the Father of Medicine, who said, “Let thy food by thy medicine and  medicine be thy food.”   Be that as it may, the majority of dietary supplements on the market today contain synthetic (unnatural) ingredients. Even the most popular supplement sold on the market, Vitamin C (ascorbic acid,) is made with synthetic chemicals during its manufacturing process.  In fact, many of them are listed with the Environmental Protection Agency (EPA) as highly toxic chemicals. The ingredients used to make vitamin C include: Acetone (also found in nail polish remover,)  Benzene  (gasoline,)  Perchloric Acid (rocket fuel,) Toluene (paint,) and Bleach (tidy widys). Researchers from Mt. Sinai School of Medicine concluded that Vitamin C Supplements can cause genetic damage to a person’s DNA.   This cellular  damage starts at the  500-milligram level, which most supplements on the market far surpass.

I want to reiterate that; natural vitamin C doesn’t cause genetic damage, only the ascorbic acid form created by chemists in a lab.     Why then aren’t GNC and other stores being sued for selling synthetic and potentially dangerous Vitamin C supplements?  For that answer, follow the money.  The largest manufacturers of ascorbic acid just so  happen to be pharmaceutical giants Pfizer,  Merck, Duphar and BSF.   Big Pharma  makes hundreds of millions of dollars from the sale of this potentially dangerous synthetic vitamin C,  yet the Attorney General and FDA look the other way. However, when GNC sells a dietary supplement that is not lining the pockets of a Big Pharma lab,  the product  goes under scrutiny.

WHAT DEFINES “A DRUG”?

I have always found it unfair how  the FDA won’t put their stamp of approval on a dietary supplement that “hasn’t been proven to be safe” according to their standards,   yet they will place their seal of approval on drugs that go on to kill hundreds and even thousands of people.  Let’s look at  picamilon, the ingredient sold by GNC that is causing all the ruckus.  This supplement is formed by a combination of niacin (vitamin B3)  and  GABA (an amino acid  that’s directly responsible for the regulation of muscle tone.)  GABA, short for  gamma-Aminobutyric acid, is the most abundant amino acid found in  tomatoes and also plays a role in cellular signaling in plants. This combination of ingredients is used medically to treat neurological disorders in Russia, and for that reason,  it has not been granted FDA approval in America.  By the way, don’t   let the word “drug” scare  you.  By FDA definition,  any dietary supplement that alters the body’s  chemistry, changes its pH, reduces fat, purifies blood, or increases the immune system, is  considered an unapproved “drug.”

How many people have died after taking picamilon ?  None.  Not one death. How many people died from taking the FDA approved arthritis drug Vioxx?   After 140,000 cases of serious heart disease and 60,000 deaths, its maker, Merck, finally took the deadly drug off the market.  The Attorney General didn’t sue Merck for millions of dollars like they are doing to GNC.  While GNC is being punished for selling picamilon, a weight loss supplement that is deemed “untested and unapproved,”  here are some weight-loss drugs that were tested, granted approval and considered safe by the FDA:

While I certainly am not writing this article condoning the use of picamilon, what I do  advocate is a fair playing field. For example, let's look at the supplement called red yeast rice, an  all-natural herbal product I’ve been recommending for years to patients suffering from high cholesterol. Red yeast rice naturally contains several ingredients that have been shown to help  control cholesterol levels including monacolins, plant sterols, isoflavones, and monounsaturated fatty acids, or “healthy fats.”  Studies have shown that red yeast rice can significantly lower levels of total cholesterol and specifically LDL, or “bad” cholesterol by 26% in just eight weeks.  Because the FDA’s definition of a drug is, “Anything that cures, treats,  prevents or diagnose a disease,” this means red yeast rice is considered a drug.  In fact, the most potent ingredient in red yeast rice, monacolin K, is  also known as lovastatin, the active ingredient in the prescription cholesterol drug Mevacor.  Because this prescription drug version is eight times more expensive for consumers than red yeast rice, the pharmaceutical manufacturer of Mevacor tried to have the natural ingredient banned for sale in the United States.  While red yeast rice is currently still available at some health food stores, most  are very careful not to have   “cholesterol lowering” on the label or they too could be at risk of being sued for selling a drug.

Lets  look at the other ingredient GNC is being sued for selling, BMPEA (β-Methylphenethylamine ). BMPEA is found naturally  in certain acacia plant species, and acacia has been in the food supply for quite some time (an example would be acacia gum or gum Arabic). As a food substance, the FDA considers acacia as GRAS (generally regarded as safe.) However, when used as a weight loss supplement that competes with Big Pharma,  their view  changes even though proof of  BMPEA’s efficacy and safety was submitted to the FDA by several scientists and doctors (see: https://blog.priceplow.com/bmpea#natural).

So then why are BMPEA  supplements  being banned?  Because in May of this year, a  53 year old Swedish woman suffered a hemorrhagic stroke after a workout regimen. It was discovered that   thirty minutes before exercising,  she took a pre-workout supplement called “Jacked Power”  which contained BMPEA.   Did the BMPEA cause this woman to have  a stroke? According to the World Health Organization, stroke is the third leading cause of death in the world. 15 million people suffer strokes  worldwide each year. Of these, 10 million die or become permanently disabled. Can we really look to  the supplements these people took prior to their stroke and consider them to be the cause?  A big percentage of those people that suffered a stroke drank coffee that morning.  This doesn’t prove that the stimulant caffeine was responsible.  Just because a lady from Sweden suffered  a stroke after taking BMPEA, likewise, this  is not sufficient evidence that the  ingredient is dangerous.

I find it very contradicting that  energy drinks have been linked to causing heart attacks, strokes and death, yet they remain on the market. The  Center for Science in the Public Interest obtained company shared reports from the FDA which lists  34 deaths occurring  after people consumed energy drinks. The dangerous  chemical found in most of these beverages is  called Taurine, an amino acid that,  when mixed with caffeine, can lead to heart attack and stroke. Why then are so many  Taurine/Caffeine energy drinks still on the market?  They’ve been linked to 33 more  deaths than BMPEA,  the ingredient GNC is being sued for having in their products.  For that answer, once again, follow the money.  Energy drinks like 5 Hour Energy, Monster and Redbull aren’t claiming to cure, treat or prevent obesity,  a “disease” according to  FDA guidelines.  If “low energy” is ever labeled as a disease, retailers of energy drinks could be sued for selling an unauthorized drug.

The FDA and Attorney General (national and state) have gone after many supplements  for being  “unapproved weight-loss drugs.”  In the mid 90’s,  a patient of mine died  after taking the  “approved  weight-loss drug,”   Fen-Phen, which was considered by the FDA as  safe.  Fen-Phen was taken off the market only after  it caused millions of users  to suffer  serious heart valve damage and a deadly lung condition called primary pulmonary hypertension.

As a nutritionist, I can’t  advocate many of  the body building and weight loss supplements on the market; however, I do believe and support GNC’s  right to sell products that have not been proven to be a health risk.  Solution?  We need an unbiased governing organization that can fairly oversee and regulate the dietary supplement industry instead of the FDA, who also regulates toe nail fungus medications, or the Attorney General, whose job it is to supervise the Federal Bureau of Investigation (FBI,)  Drug Enforcement Administration (DEA,)  Bureau of Alcohol, Tobacco, Firearms and Explosives (ATF,)  and  Bureau of Prisons.   For the  dietary supplement industry to be treated fairly,  this   would require a standalone enforcement agency that has no ties to Lobbyists, Big Pharma or  Big Government.