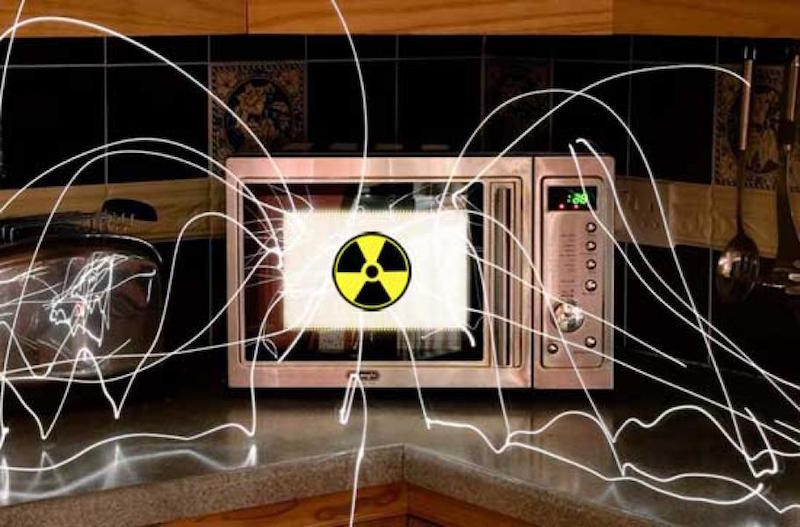 Most Americans have a microwave oven. They’re convenient, quick and are less messy than other cooking methods. Microwaves allow you to heat up that leftover Chinese food, from cold and frigid to sizzling hot, in less than a minute! In spite of the popularity and convenience of the microwave, many people still have concerns about its safety. For decades. I’ve had patients ask me if using a microwave oven makes food less healthy by destroying its nutrients? I’ve also heard how microwaves create dangerous radiation inside the food which can make people sick and even causes cancer! And of course, there are those shocking photos that went viral showing a plant dying after being watered with water that had been previously heated in the microwave.

Today, I will set the record straight…

When people found out microwave ovens use radiation, this became synonymous with nuclear power plants and nuclear weapons. It was a bit frivolous, but that's how the term “nuking your food”  came to be when referring to warming up food in a microwave oven. Some people leave their kitchen when microwaving food, for fear of being exposed to radioactive waves floating in the air and entering their body. For the record, microwaves do not make food radioactive. They produce non-ionizing radiation, which is similar to the radiation produced from a cell phone. Microwaves are powered by a magnetron, which sounds like something you’d see in a Transformers movie, but it’s actually just a mechanism for converting electricity into short-wave energy. Microwaves selectively target water molecules in food, causing them to vibrate and release heat quickly. In other words, they simply heat food.

Microwave ovens are designed and tested to ensure that none of the non-ionizing radiation escapes during its use and there is absolutely no lingering radiation when it’s turned off. On the other hand, a cell phone emits constant radiation frequencies, which may increase your risk of mental health issues, thyroid disease, cancer, and brain tumors. Yet people don’t think twice about keeping their cell-phones next to their body during all hours of the day and under their pillow at night when they sleep. But many of these same cell phone users worry about the health risks associated with heating up a bowl of soup. Microwave ovens do not cause cancerous radioactive contamination. Extensive research conducted by the Department of Food Science and Nutrition showed there is no evidence that eating microwaved foods is detrimental to humans or animals.

Many people believe that zapping their food in the microwave destroys its nutritional value. The truth is, microwaves do not destroy the nutritional value of food any more than other cooking methods do. In some cases, microwaving is even better at preserving nutrients and preventing the formation of harmful compounds (like grilling food can cause.) The longer you cook food, the more nutrients tend to break down, and microwave cooking takes less time.

Research published in the Journal of Food Science showed, compared with boiling, pressure cooking and baking, microwave cooking maintains the highest levels of antioxidants in beans, beets, artichoke, asparagus, garlic, onion and spinach. Microwave cooking increased antioxidant activity in eggplant, corn, peppers, and Swiss chard. On the other hand, boiling and pressure cooking led to the greatest antioxidant losses. Cornell researchers found that spinach retained nearly all of its folate when microwaved but lost most of this B vitamin when boiled on the stove.   Because microwaves penetrate food, they heat it much more efficiently and quickly, so there is less time for vitamins to break down and you don’t get a crust on the outside that has been heated much more than the middle. Microwaved food has about the same nutrient levels as steamed food.

One health concern regarding microwaving food, which I cover extensively in my #1 best-selling book, Food Sanity, how to eat in a world of fads and fiction, is heating food in plastic containers.  Chemicals like BPA, Phthalates, and PFOA can leach into  your food and cause an array of health issues, including autoimmune disease, weight gain, thyroid disease, and cancer!  Instead of heating food in plastic containers, use plates and bowls made from glass or microwave-safe ceramic.

Myth #3: Microwaves Ovens Cook From the Inside Out

While many people believe microwave ovens cook the inside of food first and then the outside, this is not the case. Microwaves actually cook from the outside in. The frequencies bounce around inside the oven and heat up the outer molecules of the food in a relatively efficient manner. The reason you have to rotate food that is unthawed and frozen is because the molecules are compressed and it heats up very slowly at first.

A sixth-grade student conducting a science fair project created a viral frenzy when he posted photos of a plant supposedly watered with microwaved water compared to water that was heated on a stovetop. The plant having microwaved water withered and died in 9 days, compared to the plant that was watered with purified water, which flourished. The rationale behind this has been touted as “microwaving water changes its molecular structure” which can be dangerous for plants and therefore also to humans.

First of all, there’s been doubts as to whether the photographs used actually depict a real experiment rather than some digital fakery, like this student’s “Day One” through “Day Five” photos appear to be remarkably consistent in camera angle, lighting, positioning, background elements compared to the picture taken at “Day Nine.”   Even if these photos are real, this is not an accurate scientific experiment. Was the soil the same in the two plants? Were they given equal amounts of water? Was a plastic cup used in the microwave to heat the water? Chemicals in plastics like BPA, Phthalates and PFOA chemicals can be toxic to plants. Was the sunlight conditions the same for both plants? Was there some difference in the seeds? Could the overzealous student simply have watered one plant and not the other?

If we ignore anecdotal experiments (many of them can be found on the internet) and look at scientific research, will heating water by microwave change its structure compared to boiling it on the stove? No matter if the water is boiled on an electric, gas, induction stove, wood-burning stove, or microwave oven, heating water does nothing other than raise its temperature. There is no scientific evidence showing microwaved water loses its “structure or energy” compared to water that has been boiled on the stovetop. This theory has been thoroughly tested and debunked by The Straight Dope, Snopes and Hoaxes.org, the three leading unbiased fact-checking sources on the internet.

I do want to mention, Water (alone) being heated in a microwave oven doesn’t produce bubbles like boiling it on the stove does. Without bubbles, the water cannot release the heat that has built up. Because the liquid does not boil, it will continue to heat up beyond its boiling point, even after it enters your stomach.  That means coffee, tea or soups heated in the microwave will get hotter and stay hotter than if it was boiled on a stovetop.

Microwaves actually use less electrical power than conventional electric or gas ovens.   It would take 50 minutes to cook lasagna in the stove but just 14 minutes in a microwave oven. A microwave is a much more energy-efficient way to cook, partly because a stovetop wastes a fair amount of heat. According to the EPA, the microwave uses 80 percent less energy when heating up relatively small amounts. Although the microwave needs a lot of electricity, it’s a relatively short burst of power.

Although cooking accounts for only 3 percent of the total greenhouse gas emissions from residences, every bit we can cut is significant. Using a microwave results in substantial savings on your energy bills. As a cost comparison, to heat your soup in the microwave would cost you about 1.8 cents, while using a gas burner would run you 7.1 cents.

My Closing Thoughts on Microwave Cooking

Since I’ve debunked the most common microwave myths, you probably think this is my preferred method of cooking. That’s not the case. While I do own a microwave oven, I personally prefer baking, steaming or stir-frying my food. This is simply because I enjoy the process of cooking, seasoning to taste and the wonderful aroma that stove cooking brings. I also personally feel that food tastes better when it’s cooked on (or inside of) a stove compared to food that’s been microwaved.