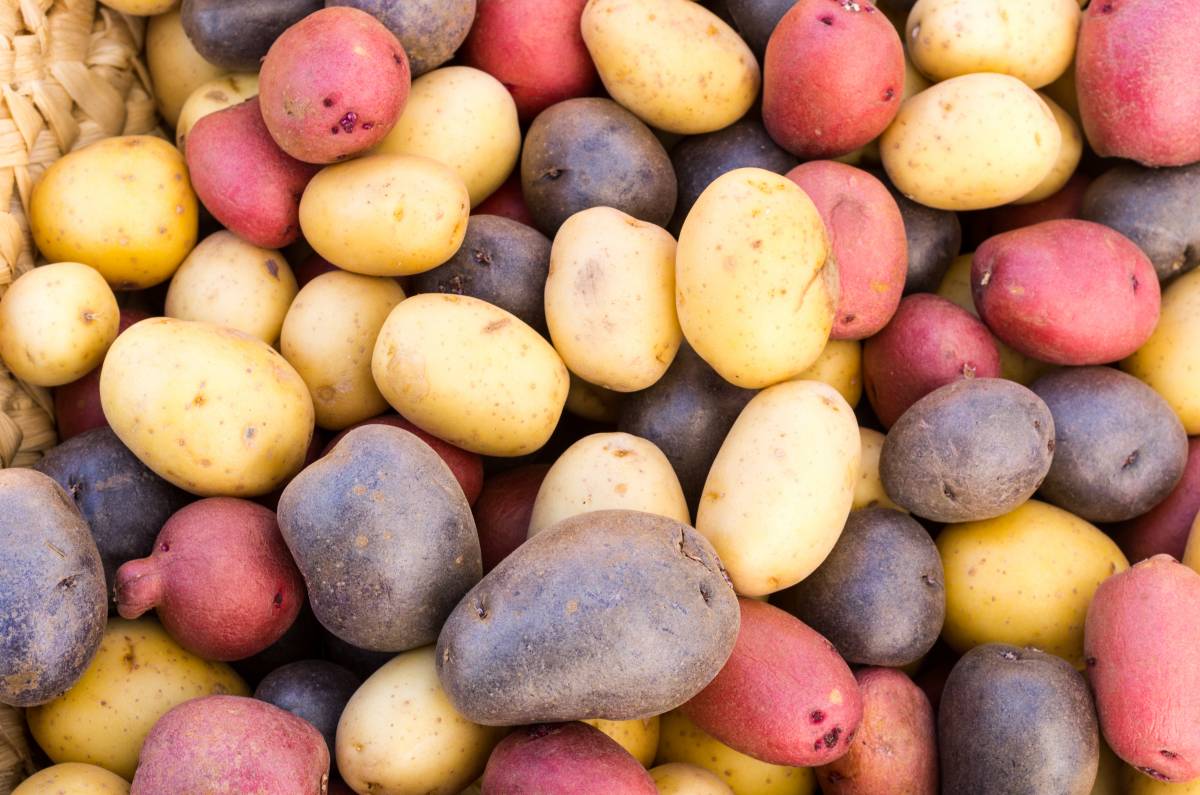 Potatoes Ranked by How Healthy They Are

Potatoes come in many shapes and forms, some healthier than others. I’m going to rank the most common types of potatoes — from super healthy to super not.

Top on my list is red potatoes. They contain the highest levels of vitamins, minerals, and healthy phytochemicals.  They’re high in quercetin, a flavonoid with powerful anti-cancer and anti-inflammatory properties. They also offer more lutein (for eye health) and choline (for brain health) than any other potato on this list. One large red potato supplies half of the recommended dietary allowance of vitamin B6, which aids in the metabolism of protein, carbohydrates, and lipids and helps in the formation of red blood cells. A single red potato also supplies 30 percent of the recommended daily intake of niacin, which is essential for energy production from food and helps digestion. Niacin also helps lower LDL cholesterol — i.e., ‘bad cholesterol’ — and supports healthy skin and nerves.

When it comes to the mineral potassium, which is vital for heart, nerve, and muscle control, most people think of a banana as the go-to — actually, a banana only contains 422 milligrams of potassium, compared to a red potato, which contains a whopping 1,670 milligrams of potassium.  Increased potassium intake allows the body to excrete more sodium through the urine, which may help lower blood pressure. Also, much of the nutritional value of the red potato is found in its skin, so never peel them. Prepare them baked in their skin for the best nutritional value.

Even though they have the word ‘sweet’ in their name, these potatoes are diabetic-friendly and won’t spike your blood sugar. In fact, their high fiber content actually helps with blood glucose control and weight management.

Orange-fleshed sweet potatoes are one of nature’s unsurpassed sources of beta-carotene, which is needed for healthy skin and mucous membranes, our immune system, good eye health, and vision. Sweet potatoes are also high in manganese, which aids in the formation of connective tissue, bones, blood-clotting factors and sex hormones. This mineral also plays a role in fat and carbohydrate metabolism, calcium absorption, and blood sugar regulation.

Tater health tip: After a strenuous workout at the gym, consume a sweet potato with a little cinnamon on top (which has anti-inflammatory properties) and your muscles will recover twice as fast.

These are considered to be part of the sweet potato family, but instead of being orange on the inside, they’re purple. What makes them different than the orange-colored sweet potatoes are two genes — IbMYB1 and IbMYB2 — that get activated to produce the pigments responsible for the rich purple tones of the flesh. The purple is due to anthocyanins — primarily peonidins and cyanidins — that have important antioxidant and anti-inflammatory properties. In fact, purple potatoes contain four times as many antioxidants as russet potatoes.

They also may help to lower the potential health risk posed by heavy metals and free radicals. Purple potatoes have been found to slow the growth of certain types of cancer cells in test-tube studies, including bladder, colon, stomach, and breast cancer. Finally, a study presented by the American Chemical Society found that eating purple potatoes may lower blood pressure. This could be because of their high concentration of a phytochemical called chlorogenic acid, which has been linked to reduced hypertension.

Many confuse russet and white potatoes as being the same thing, but they’re quite different.  If you’re a steak-and-potato person, russet is your go-to. Russet potatoes are larger and more oblong in shape than white potatoes, and they have tougher skin, which is also commonly kept for skin-on French fries.

However, the way you eat your russet potatoes can really change how healthy they are. If you top a baked russet potato with butter, sour cream, and bacon bits, it can quickly become an artery-clogging monstrosity. But eaten plain or with heart-healthy garnishments, such as olive oil and chopped chives, a russet potato contains nutrients and fiber that can benefit your heart, bones, immune system, and metabolism. Make your baked russet potato even healthier and more flavorful by adding some parsley or green onions, or topped with sautéed mushrooms and bell peppers.

A fingerling potato is a small, stubby, finger-shaped potato,(hence the name). Fingerlings are an excellent source of vitamin B6, which plays an important role in the production of red blood cells, liver detoxification, and maintenance of the brain and nervous system. Fingerling potatoes are also rich in vitamin C, which has immune-boosting properties.

However, white potatoes also have a downside. The negative aspect of white potatoes is that they’re considered a high-calorie food compared to other staple foods, such as rice and pasta. That said: The carbohydrate or starchy part of this potato also ranks high on the glycemic index — that means it enters the bloodstream faster, which is a plus if you’re an endurance athlete. Food is fuel and a plain baked potato makes an excellent meal before a challenging workout.

New potatoes aren’t really a variety by themselves — they’re simply the baby version of any potato that a farmer grows. New potatoes get purposely thinned out early in the season in order to make room for the rest of the potatoes to mature.

A single cooked new potato contains only 25 calories, and about 85 percent of those calories come from carbohydrates, while nearly 10 percent come from protein and four percent or less from fat. New potatoes offer some vitamins and minerals, however, because they haven’t fully matured, new potatoes have less nutritional value than their fully-grown counterparts.

A traditional homemade serving of mashed potatoes can contain 237 calories or more when they’re prepared with butter and whole milk. Some restaurants use heavy cream to prepare their mashed potatoes, which drives the fat and calorie count even higher. Top your mashed potatoes with gravy, and they could easily reach 450 calories.

However, you can make healthier mashed potatoes at home — if you’re willing to skimp on the butter, that is. Blend cauliflower with the potatoes to get a buttery, smooth flavor with fewer carbs. You can also whip potatoes with Greek yogurt to get a creamy consistency. Then, instead of butter, you can give your mashed potatoes some zest by using extra virgin olive oil and seasonings, like chives, paprika, garlic, or thyme. Lastly, forego fatty milk and try using healthier almond or cashew milk instead.

I’ve had many patients who believe that eating French fries is adding a healthy vegetable to their diet. Unfortunately, that’s not true. French fries aren’t only unhealthy — they’re potentially deadly. In an eight-year study published in the American Journal of Clinical Nutrition, fried potatoes can actually increase your risk of mortality. Eating more potatoes, in general, didn’t have any health risks associated with them, but researchers found that fried potatoes of any kind, like French fries and hash browns, increased mortality risk twofold.

One reason French fries are so bad for you is the number of trans fats they contain. Consuming trans fats has been shown to increase the risk of coronary artery disease in part by raising levels of ‘bad cholesterol,’ lowering levels of ‘good cholesterol’ and increasing triglyceride levels [which can contribute to fatty buildups in your arteries]. Then there’s a chemical in French fries, acrylamide, which has been linked to increased cancer risk.

Worse yet, dipping them in ketchup only adds fuel to the unhealthy fire. Ketchup contains high fructose corn syrup, which has been linked to causing attention deficit disorder, obesity, heart disease, and cancer. Two tablespoons of ketchup also contain eight grams of sugar, and most people gob more than this on their plate of fries.

If you love French fries, there’s a healthier way to eat them.  Instead of frying them, try baking them in the oven using extra virgin olive oil. Then, instead of white processed salt, use a healthier variety, like black Hawaiian salt or Himalayan sea salt.

This is the most unhealthy potato. It’s a very dense, immobile spud that tends to easily mold. Research shows this potato is associated a 112% increased risk of diabetes. 147% increased risk of heart attacks/strokes, and 90% increase risk of death!  This potato is also linked to lethargy, and a lack of motivation.  Sitting is the new smoking. If you’re spending too much of your day sitting, then YOU are an unhealthy couch potato. Get up and walk, stretch and move more! A ship at sea will never develop barnacles but a ship sitting stagnant at the dock will. Don’t be a barnacled baked potato.